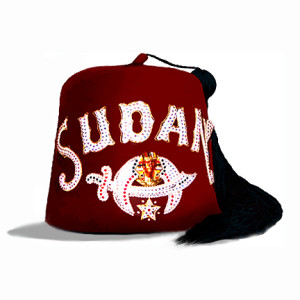 In the summer of 1986, several Cumberland County Shrine Club members met at Bedsole’s Pig and Chicken Restaurant to discuss the formation of a new Shrine club in the town of Hope Mills.  On June 11, 1986 the first meeting of the newly formed Shrine club was called to order by Noble Jim Hay. He appointed Noble Louis O. Dean as acting recording Secretary.  Noble Archie Cameron delivered the first invocation followed by the Pledge of Allegiance to the flag of our country. As per the instructions of the Potentate, Noble Hay informed the attendees that this club would be governed by the same by-laws adopted by the Sudan Temple that governed the other 39 Clubs. It was decided that the name would be the Hope Mills Shrine Club. It was further decided that applications and fees received by the end of the next meeting would be considered Charter Members. A copy of the by-laws would be given to each new member.

Illustrious Sir Layton D. Rhew, the Potentate of the Sudan Temple, installed the Officers and presented the Charter on June 26, 1986. The Potentate congratulated the Officers and challenged them to be successful in all of their endeavors for the Shrine Hospitals. The Potentate introduced several members of his staff to include Noble Jim Hay, Membership Chairman.  Noble-President Rice challenged the Club to build a strong foundation, grow the membership and plan events to contribute to the Shriners Hospitals for Crippled and Burned Children. He announced that the Club would meet on the fourth Monday of each month, at a place to be announced prior to each meeting. Noble President Rice introduced Noble William P. Hardy, who became the first member of the Hope Mills Shrine Club to join the 100 Million Dollar Club with a donation of $100.00.

The first regular club meeting was hosted at Bledsoe’s Restaurant on Legion Road and later convened at the facility on East Mountain Drive which is now the present day Moose Lodge.  Noble Louis Dean, chaired the first building committee. The committee sought several parcels in and around the Hope Mills area until the present site was agreed upon and purchased. The building plan chosen is an exact replica of the Greenville Shrine Club.

Over the years many Nobles and their Ladies have contributed immensely to the success of the Hope Mills Shrine Club. Today, as it was in the beginning, we have remained true to our charge of supporting our members, the community and the Shriner’s Hospitals.